May 31 is World No Tobacco Day

Smoking is the most preventable cause of premature death in the United States.

The World Health Organization created World No Tobacco Day in 1987 to encourage a 24-hour period of abstinence from all forms of tobacco use, and to spread awareness of the negative health consequences caused by tobacco.

Smoking not only takes the lives of those who use tobacco, but also those who are exposed to second-hand smoke. The bottom line is that no tobacco product is safe. 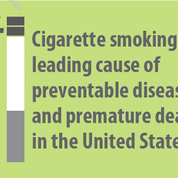 Did you know smoking causes more deaths each year than the following causes combined:

Smoking is estimated to increase the risk: 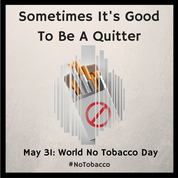 What you can do:

World No Tobacco Day is observed around the world every year on May 31.

E-cigarettes are the most commonly used tobacco product among youth in the United States. A comprehensive approach to reduce youth initiation of e-cigarette use and population exposure to e-cigarette aerosol…