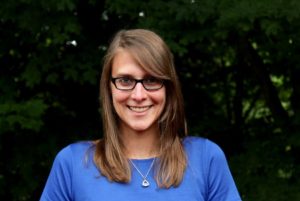 Kortni began college with passion for sports and plans to become an athletic trainer. However, during her sophomore year of college, she was diagnosed with cancer, followed by 16 months of sickness, chemotherapy and radiation.

After her diagnosis, she realized the good that preventative work could do for the public’s health. Today, she says that the worst thing that has happened to her guided her into the best career path she could have imagined.

“vigorously network and push themselves outside of their comfort zones.”

In her free time, she enjoys kayaking, adventuring with her husband and two dogs, reading, and crafting. She and her husband are expecting their first child in October.